Pro Pickleball as Far as the Eye Can See

Welcome to the official pickleball publication of Thanksgiving week (and every other week). No newsletter this Friday, but we'll see you Wednesday, and hopefully this isn't you on Thursday:

The 2022 World Cup is estimated to cost $220 billion. That equals $35 million per minute of soccer played in the next month.

The cost of a minute of pro pickleball? We're guessing somewhere around the cost of a pack of balls.

In this issue, we're posting results from:

To quote Coach Bombay (Might Ducks, anyone?), "We're team USA and we're going all the way." Come along for the ride.

Timeout. Sit down, take a drink, and rest. Or, better yet, don't do any of that.

Pickle is a game of streaks. Momentum alone can win you a game and one of the few tools pickleballers have to halt momentum is the timeout.

If your opponent calls one, they're trying to break your momentum. Don't let them. One of the best ways to stay in the zone is to literally stay in the zone. Stay on the court. Don't sit down and tell your body the job is done when it isn't.

It's easy to lose your touch during a timeout. We've seen it a hundred times: a team is hot entering a TO then loses 3 or 4 points in a row.

So instead of leaving the court, grab the ball and volley with your partner during the timeout. This keeps your game sharp and probably demoralizes your opponent.

If you need a drink and a rest, by all means, take it. But if you're up by 8 points and almost have it in the bag, collect those last few points and wash the victory down with some water after the game. No one wants to tell the story of how they were up 10-0 and lost 12-10.

On the flip-side, we'll pose a question: why are there far more timeouts in pro matches than in amateur matches? Pros know the power of the timeout. So be like them and harness that power, too.

We all want more energy without the jitters, sketchy ingredients, or sugar lows. Organifi Red Juice will keep you moving with powerful adaptogens.

First off, Red Juice doesn't contain any caffeine - and it doesn't need any. An organic fruit blend packed with ginseng and cordyceps provides energy support when you need it without keeping you up at night. Research-backed delicious superfoods support pickleball performance.

And, each glass of Red Juice only contains 2 grams of natural sugar for sustainable energy - no sugar crash mid-meeting or mid-game!

Best of all, Red Juice tastes amazing! Like a healthier fruit punch, bursting with berry flavor...Oh yeah, did we mention it's 100% organic?

Our pickleball community loves Organifi's products and enjoys the performance benefits on the court.

Full-time attorney Andrea Koop laid down the law at the Takeya Showcase. Koop and associates teamed up for two gold medals yesterday. She represented herself well, winning her first PPA Tour medal in mixed doubles with AJ Koller.

After changing her flight to compete with Koller Sunday, Koop decided to make the most of it and snag another gold medal with Vivienne David in women's doubles.

Veteran of the game Irina Tereschenko and new PPA Tour signee Etta Wright made an unexpected run from the eight seed to the women's final. They upset the draw's top seed Lucy Kovalova/Callie Smith in addition to Anna Bright/Parris Todd. Look out for Wright/Tereschenko if you see them in 2023.

Catherine Parenteau has struggled with Salome Devidze for most of 2022...but she won in dramatic fashion in yesterday's women's singles final. Down 6-0 in game 3, Parenteau used the side change to her advantage and rallied back for the 12-10 win.

Matt Wright and Riley Newman were victorious in their latest bout with the Johns brothers. They hold the title entering the final stop for 2022 in Orlando.

Ben Johns secured the men's singles season title with a win over Tyson McGuffin. McGuffin displayed his frustration with a Bo Jackson-esque paddle smash over his quad. Johns is slotted to finish #1 in the PPA rankings for men's singles and doubles.

Changing my Major to Pickleball

The first ever DUPR Collegiate National Championships took place in Dripping Springs, TX over the weekend. Sixteen universities from across the nation competed in the MLP-style tournament for a grand prize of $10,000. That's a lot of a beer money.

The University of North Carolina squared off against Utah Tech in the tournament's championship match on Saturday. UNC drew first blood with a win in women's doubles. Utah Tech answered with a men's doubles victory.

Ultimately it was the 21-19 mixed doubles victory in game four that gave UNC the win and the title as National Champions. Congratulations Sarah Carpenter, Caitlin Lewis, Hunter Boyd and Collin Schick.

The World Pickleball Tour is bringing the camp experience to a whole new level.

From February 13-16, 2023, celebrity coach Matt Manasse and the WPT team are inviting guests to the coast of Mexico for the first in a series of extraordinary experiences that have been meticulously designed for those who share our love for the sport.

Registration is now open and will fill quickly. Reserve your spot now.

Jorja Johnson was two-thirds of the way to a triple crown when storms showered the World Pickleball Open. She won women's doubles with Milan Rane, mixed with Gabriel Tardio and was the favorite for women's singles on Sunday.

Rain delayed play on Sunday, preventing Johnson from completing the triple crown. Meanwhile, on the men's side, Jorja's brother JW Johnson picked up a gold of his own. JW teamed up with Andrei Daescu to win the men's doubles title.

To complete the family set, the Johnson's matriarch Julie grabbed a gold of her own in the senior mixed doubles division. You don't mess with the Johnson family, especially in South Florida.

This means Pickleball.com will serve as the home to all DUPR events, including DUPR Waterfall Tournaments, Flex, and Team leagues.

The move is expected to eliminate confusion and the inconsistencies associated with multiple rating systems during tournaments, uniting the sport under a single rating system.

"This partnership will enable Pickleball.com & DUPR to create more innovative amateur player experiences, optimize ratings, and most importantly, grow the game we all love,” says Jill Braverman, CEO of DUPR.

Pickleball’s most innovative handle company is back at it again. ProXR Pickleball introduces the first ever Carbon Paddle combined with XR Handle technology.

Learn more about why the best in the sport are adding ProXR technology to their game at proxrpickleball.com!

Waters Makes it 7 on the Year 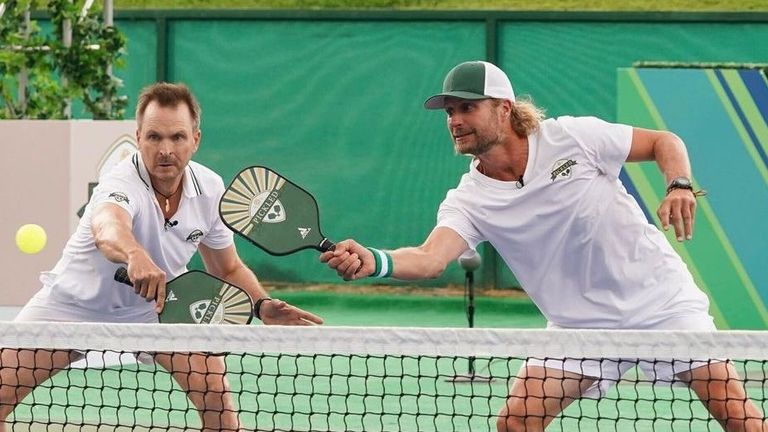