If you'll forgive a bit of self-promotion, we want to take a moment to thank our readers for their feedback (something every reader can do via the link at the bottom of this email).

“The Dink is a perfect mix of pickleball news, pro tournament results, information on future tournaments, and, quite possibly, most importantly, appropriate instruction. All of this in an easily readable style with appropriate links for when a reader wants to dig in."

We love to see it. To celebrate our readers, we're reminding you that today is the last day to enter our free paddles for life giveaway. Details here.

For most players, 'the backhand' is a sore subject. Everyone wants a better one but no one wants to work on it.

The best way of course is drill it, sun up to sundown. But who has the court time, hopper of balls and feeder to make that possible?

An obvious but under utilized way to get more reps in is to volley back and forth with a partner. This can be done off-court, at home, or while waiting for your next game. Check out the Johns brothers taking advantage of a rainy day by working on the backhand volley.

The goal is to become more comfortable with the anatomy of the shot, building muscle memory in the shoulder and forearm for a motion that is not typically used off the court.

Start 8-10 ft from your partner and 'pepper' the ball back and forth (shout out to Casey Patterson and all of the volleyball converts). On the first attempt, the ball is likely to be flying all over the place, so it's wise to keep a backup or two in your pocket ready to go.

You're not trying to win the rally, but rather to work on control. If you and your partner can string together 100 straight backhand volleys, you'll be in rare company. Time to get to know your backhand like...well...the back of your hand.

AVI is elevating Pickleball by creating exceptional athletic wear. They believe everyone — from professional athletes to casual enthusiasts — deserves well-constructed, expertly designed clothing made just for their sport.

With pockets created specifically to hold pickleballs, comfortable fabrics, and ultra-lightweight feel, AVI is elevated performance wear for both on AND off the court!

Pickleball is rapidly growing in Australia, and the country is welcoming it with wide open arms.

In fact, according to The Age, “the game has surged there from virtually nothing five years ago to a boom sport, growing 20 percent a year.”

This article didn’t speculate on the impact of Aussie tennis pro Nick Kyrgios’s recent investment in pickleball, but we have to assume it helps.

Something we think is especially intriguing about the sport’s development Down Under: it’s not competing with tennis.

“Tennis Australia is planning to offer [pickleball] at clubs around the country,” the article says, explaining how the situation is very different in the US, where it seems like grumpy tennis people are actively trying to take pickleball out.

Apparently, tennis clubs there recognize that offering pickleball is a way to preserve and expand their membership.

“To emphasize that spirit of cooperation, pickleball just made its debut on hallowed tennis turf at Kooyong, with a demonstration court set up behind the famous center court during the Kooyong Classic, a warm-up event for the Australian Open.”

With less than two weeks until the first MLP tournament of the year, the association announces two final teams for the year: Orlando Squeeze and St. Louis Shock.

Even though none of its matches have kicked off yet, MLP has been busy so far in 2023.

This news comes soon after it was announced that New York Giants wide receiver Odell Beckham, Jr. bought into the DC Pickleball Team.

Side note: is Orlando Squeeze’s logo the best of the MLP? We think it’s pretty hard to beat. But then again, look at our mascot…

Meanwhile: the Tennis Channel wants in, too. The cable channel has agreed to broadcast MLP's premier level semifinals and finals in Mesa, Arizona, and will make all the tournament's matches available for streaming.

Learn Something New Every Day

Start your day off right with Morning Brew - the daily email that makes reading the news actually enjoyable.

Every morning, Morning Brew summarizes the top news stories and delivers them straight to your inbox so you can quickly get caught up on the way to work or over your morning coffee.

Unlike traditional news which can be boring and dense, Morning Brew is fun to read and easy to understand. The best part? It’s completely free and only takes 5 minutes to read so you can get all the most relevant updates and move on with your day.

It’s no wonder over 4 million people read Morning Brew. Try it for free.

Imagine it's the first day of second semester and everyone is subtly showing off their brand-new kicks, backpack and gear. In the pickleball world, the first tournament of the year is the time to show off your new paddle.

Speaking of the PPA Tour, in a press release Wednesday, they unveiled new major milestones for 2023:

For some, the days of scraping by to chase a hobby are over. The release indicated that on average PPA touring pros earned $96k from tour payouts last year. That number is expected to increase 63.9% this year.

What do you want to be when you grow up? How about a professional pickleballer?

Selkirk's Tour bag, one of the most popular in the game, now looks a little different.

An insulated food/drink pouch, ventilated shoe compartment, easy access through the top and the front, a laptop sleeve, larger mesh bottle pockets, room for two paddles, and a hard EVA top which stores your cell phone...all wrapped in a new polyfiber performance material.

Click here to learn more about the Selkirk Regal series: pickleball bags with no compromise.

Somebody get me a net. Stat. This court is too clean and in need of some mediocre pickle.

A review from the Dink Fam... 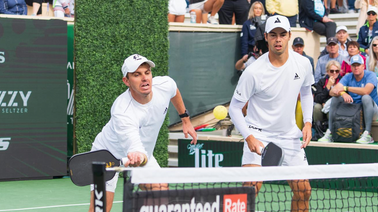